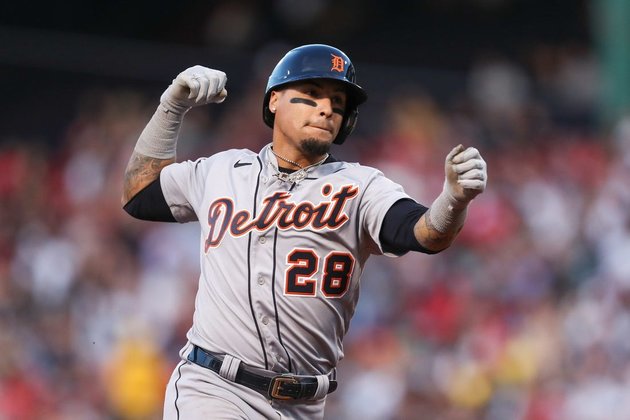 Javier Baez was supposed to provide a big jolt to the Detroit Tigers' offense but instead has been the poster boy for another poor baseball season in Motown.

Suddenly, though, Baez appears ready to emerge from a season-long slumber at the plate. He will look for his fourth straight multi-hit gameon Friday when the Tigers open a three-game series against the Arizona Diamondbacks in Phoenix.

The two-time All-Star, who signed a six-year, $140 million deal as a free agent in the offseason, went 7-for-12 with two homers, two doubles, one triple and three RBIs as Detroit was swept in three games by the Boston Red Sox earlier this week.

The spree raised Baez's average from .194 to .216 and gave manager A.J. Hinch hope that an extended hot streak is underway.

"I think his at-bats are very encouraging," Hinch said. "I mean, obviously, we've seen him do a little bit of everything so far in his time here with us. But when he is selective, and when he does go after pitches that he can handle, he does a lot of damage. And he's doing it to all fields."

Baez has belted three homers over the past five games, which raises his total to six. That meager output is tied for the team lead with Jonathan Schoop, which helps display the club's problems. Detroit ranks last in the big league with just 38 long balls.

So, the pressure is on Baez to produce.

"I think what encourages me is the track record. He's been very good for a very long time," Hinch said of Baez, who has four 20-homer seasons in his career. "The inconsistencies have been his battle, but he's very talented and very dangerous as a hitter, and he's carried teams for months at a time."

The Diamondbacks are also coming off being swept, as they dropped three road games against the San Diego Padres.

Christian Walker homered in Arizona's 10-4 loss on Wednesday, his third long ball in the past four games. Walker leads the team with 19 blasts and has produced three two-hit outings in the four-game stretch.

Diamondbacks left fielder David Peralta (back tightness) could be ready to return after missing the San Diego series.

"It's special for sure," Bumgarner said. "I'm not taking that for granted. I'm thankful for the opportunity to do that. This game has been around for a long time, and not many people have been able to do that."

Right-hander Merrill Kelly (6-4, 3.46 ERA) will start for the Diamondbacks in the series opener against Detroit. He has won three of his four starts this month.

Kelly gave up one run and five hits over seven innings while beating the Minnesota Twins on Sunday. Two starts earlier, he tossed six innings of one-hit shutout ball in a win over the Cincinnati Reds.

This will be Kelly's first career start against the Tigers. He has struck out Baez five times in 10 at-bats when the latter was in the National League. Baez does have two singles against Kelly.

Detroit will counter with right-hander Rony Garcia (1-2, 4.97), who will be making his sixth start and 14th appearance of the season. Garcia has struck out 41 and walked just nine in 38 innings.

However, he also has served up eight homers, including two in his latest outing on Saturday when he beat the Texas Rangers. The 24-year-old allowed four runs (three earned) and five hits in six innings.

Garcia has never faced the Diamondbacks in his three major league seasons.