In Terms Of Improvement, It's All About The (Eno) Benjamin 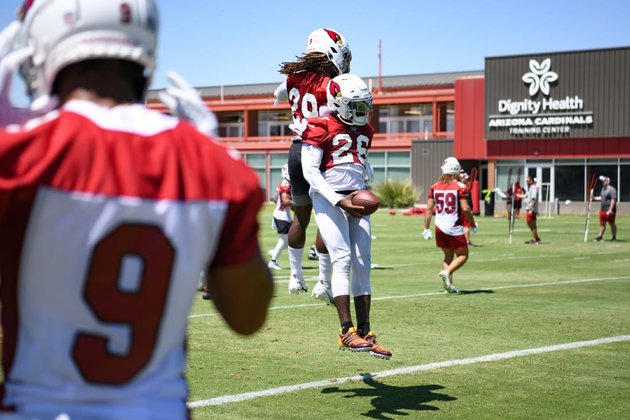 Running back has made push for regular role after rocky beginningKevin Parrish Jr.

After one season in the league, Eno Benjaminwas fighting just to stay on the Cardinals' roster.

Over the past couple of seasons, coach Kliff Kingsbury mentioned multiple times he was concerned Benjamin lacked the focus needed to succeed. Yet, with Benjamin now in his third season, Kingsbury has only praise for the former Arizona State standout.

"His running ability has always been there," Kingsbury said. "It was just learning some of the intricacies of our offense and things of that nature. But he's taken huge strides. I've been proud of what he did last year, and it's carried over to this offseason. He's having one of the best offseasons we've seen out here. I expect him to have a great preseason and we'll see how it goes."

After spending his rookie year (2020) on the inactive list, Benjamin began to show the progression Kingsbury and GM Steve Keim wanted to see in Year 2. The professionalism and work ethic took a step in the right direction. Benjamin also worked on his body and became leaner.

His shining moment came in the Week 9 victory against the 49ers, when Chase Edmonds injured his ankle, leaving Benjamin to split the carries with James Conner. In the same game, Benjamin trucked former Cardinals cornerback Dre Kirkpatrick en route for a 21-yard touchdown -- his lone touchdown of the season.

Benjamin has looked like a starting running back, according to Kingsbury. His pass catching and blocking have impressed the coach during 7-on-7 drills. Benjamin said he's always been confident in those areas; it was more about getting the chance to showcase them.

"This offseason, I felt like I have a lot to prove," Benjamin said. "Getting settled in OTA's and getting some burn, I can finally show what I got. This offseason was a huge accomplishment."

The departure of Edmonds this offseason has been a blessing for Benjamin. With Conner set to lead the backfield in 2022, Benjamin will have a chance to become RB2 in training camp. But so will the rest of the running back room, including Darrel Williams, Keaontay Ingram, and Jonathan Ward.

That won't change Benjamin's mentality entering training camp regardless of the praise he's garnered from Kingsbury.

"In our running back room, there is so much competition," Benjamin said. "Even James Conner will tell you: everyone's mindset needs to be that you're the starting running back. That's what I think every day."

Benjamin said he feels more comfortable in Kingsbury's offense. He doesn't have to think as much, which allows him to play faster and hit the holes quickly without hesitation. The details are something he's cracked down on since arriving in the desert.

But the road to his current opportunity has required patience, something many don't have nowadays.

"I feel like anyone in any job must have the patience to get where you want to go," Benjamin said. "Leaving high school and going to college, I had to wait my turn, something you could say was expected (when I arrived) here.

"It took a little bit longer (than I expected), but it's about arriving at the end of the road. Regardless of how you get there, it's just about getting there."