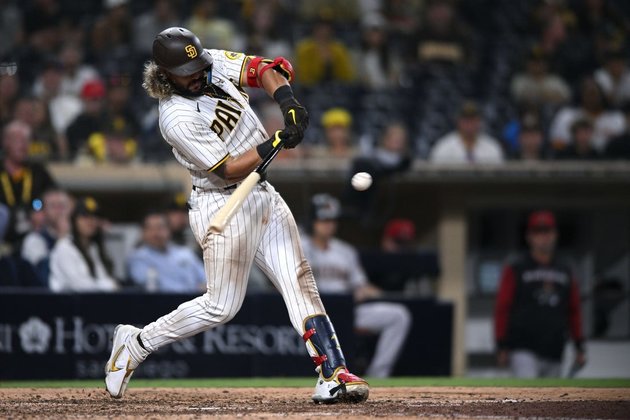 In the two games since losing Manny Machado to an left ankle injury, the San Diego Padres have produced only seven runs on 10 hits over 20 innings.

And they won both games -- with two different acting managers.

The Padres are in position to earn a series sweep Wednesday afternoon when they oppose the visiting Arizona Diamondbacks.

While Bumgarner is set for his 15th start of the season and is coming off his first win since May 10, Clevinger will be making only his second start since May 17.

Clevinger was on the injured list from May 18-June 4 due to a triceps strain. After one game back -- an outing limited to three innings -- he went on the COVID-19 injured list. He finally returned on Friday and worked two innings of two-run ball in relief against the Colorado Rockies.

Clevinger also started the season on the IL because of a knee strain.

"We don't know what kind of pitch count will be available for Clevinger Wednesday," said Ryan Christenson, who on Tuesday replaced Ryan Flaherty as acting manager as the Padres await the return of manager Bob Melvin, who has been sidelined due to the COVID-19 protocol since June 11.

Clevinger has worked a total of 19 innings this season in four starts and the one relief outing, completing as many as five innings only one time.

Martinez, meanwhile, has been the Padres' fifth, sixth and seventh starter depending on who is available at any given time. This week, he his rotation spot as staff ace Joe Musgrove was cleared from the COVID-19 protocol and is scheduled to return to the rotation on Thursday.

"I would imagine Martinez would be available out of the bullpen Wednesday behind Clevinger," Christenson said.

Pitching isn't the Padres' biggest concern. The Diamondbacks amassed just three runs on nine hits the past two nights, and they didn't manage a hit or a run in five innings against the San Diego bullpen on Tuesday.

"The theme is, these guys keep coming at teams no matter what the score," Christenson said. "The most encouraging thing on the road trip (that ended Sunday) was how all parts of the order were contributing. There were some nice rallies going where guys were just passing the baton.

"When this lineup is doing things like that, it's very encouraging."

The lineup could face a challenge on Wednesday against Bumgarner, who was sharp in his most recent outing. He limited the Minnesota Twins to two runs in six innings during a 7-2 win on Friday.

Arizona manager Torey Lovullo said after that game, "(Bumgarner) kind of controlled the game from the third inning on. I thought he did a really nice job of making pitches and executing. (We) made plays behind him, and that's key."

However, Bumgarner has always had issues with the Padres and has yet to post a win over San Diego in a Diamondbacks uniform, .

Clevinger will be facing Arizona for the first time in his career. Martinez has opposed the Diamondbacks just once, when he allowed one run in six innings during a no-decision in 2015.