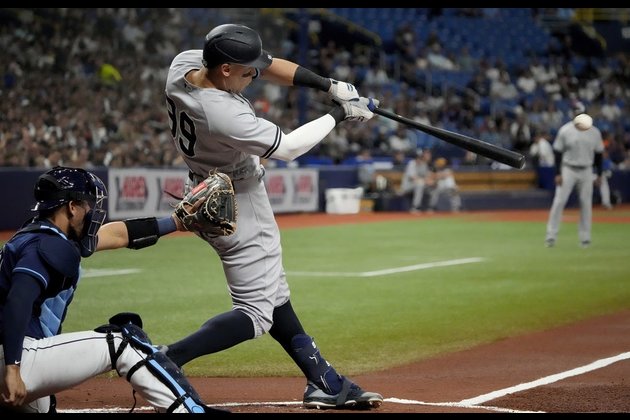 Gerrit Cole came within six outs of a no-hitter and Aaron Hicks hit a tiebreaking triple with one out in the ninth inning as the New York Yankees beat the Tampa Bay Rays 4-2 on Monday night in St. Petersburg, Fla.

Anthony Rizzo homered three batters into the game and Gleyber Torres scored on an error as the Yankees won for the 17th time in 19 games and became the fifth team to win at least 50 of its first 67 games since 1930.

Cole lost his no-hit bid when Tampa Bay's Isaac Paredes hit an 0-1 slider up the middle for a clean single leading off the eighth inning. Cole wound up with a no-decision after Clay Holmes allowed the tying run, an RBI infield single by Manuel Margot.

The Yankees regained the lead when Hicks tripled to the right field fence off Jason Adam (0-2). Margot tried to make a leaping catch, but his right knee hit the fence, causing him to fall to the ground. He was eventually carted off the field. Jose Trevino followed with a sacrifice fly and Wandy Peralta (2-1) pitched a scoreless ninth.

David Peterson combined with three relievers on a seven-hit shutout and New York used small ball to beat visiting Miami and take three of four games in the series.

Peterson (4-1) allowed six hits and walked two while striking out seven. Adam Ottavino threw 1 2/3 perfect innings for the Mets and Drew Smith worked around a two-out single in the eighth before Yoan Lopez stranded a pair of baserunners in the ninth.

Eduardo Escobar had three RBIs, including a two-run single in the eighth for insurance runs. Miguel Rojas had two hits for the Marlins.

Orlando Arcia slapped an RBI single to left field with two outs in the ninth inning to give host Atlanta a walk-off win over San Francisco.

Arcia hit a slider from Camilo Doval through the gap to score Phil Gosselin, a pinch runner for Matt Olson, who had coaxed a leadoff walk. Marcell Ozuna delivered a two-out single, and after Adam Duvall struck out, Arcia responded with the game-winning hit.

The winning pitcher was Kenley Jansen (4-0), who struck out three in the ninth. The Giants had runners at second and third with one out against Jansen but failed to score. Doval (2-3) took the loss.

Franchy Cordero went 3-for-4 with a double and two RBIs to lead the offense and Josh Winckowski earned his second win in three starts as Boston beat visiting Detroit.

Winckowski (2-1) pitched 6 2/3 innings of two-run ball and Tanner Houck earned his fifth save of the season for Boston.

Oneil Cruz and fellow rookie Bligh Madris combined to go 5-for-9 with six RBIs after both were recalled earlier Monday, leading Pittsburgh to a rout of visiting Chicago.

Daniel Vogelbach added a two-run double for the Pirates, who have won two straight after dropping 11 of 12. Pittsburgh starter J.T. Brubaker (1-7) got his first win since last Aug. 24 by pitching six scoreless innings. He allowed five hits and three walks while recording five strikeouts.

Ian Happ hit an RBI single for the Cubs, who have lost two straight and 12 of 14.

Andrew Vaughn had four hits, including a solo home run and an RBI double, and Chicago defeated Toronto.

Josh Harrison and Luis Robert added two-run home runs for the White Sox in the opener of a three-game series. The Blue Jays got homers from Raimel Tapia and Cavan Biggio.

Burnes (5-4), the reigning NL Cy Young Award winner, allowed two hits, struck out 10 and walked two as the Brewers moved back into first place, a game ahead of the Cardinals. It was Burnes' fifth double-digit strikeout game this season.

Miles Mikolas (5-5), who came within one out of a no-hitter in his previous start, allowed two runs on four hits in 6 1/3 innings, striking out three and walking two.

Jake Cronenworth and Trent Grisham hit solo homers for the Padres. Arizona's run came after a game-opening single by Daulton Varsho, who moved to second on a walk and came around on two long flyouts, the second by Christian Walker.

Darvish (7-3) gave up four hits and two walks while striking out five to win his third straight start.

Royals starter Kris Bubic (1-4) got his first victory of the season in his 10th appearance and ninth start. He allowed two runs on six hits and two walks in six innings, striking out seven and making 95 pitches.