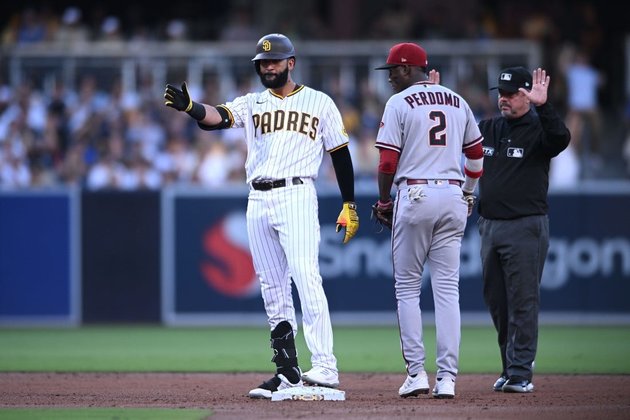 Jake Cronenworth and Trent Grisham hit solo homers for the Padres, who played without Manny Machado. The star third baseman, who sustained a nasty looking left ankle sprain on Sunday in Colorado, was not immediately placed on the injured list as the team awaited further evaluations.

"Manny has got some purple and blue in there, but overall he's moving around pretty good," said Ryan Flaherty, who again served as the Padres' acting manager as Bob Melvin remained in COVID-19 protocol. "Manny's feeling good. I think there's some pretty good optimism."

Darvish (7-3) gave up four hits and two walks while striking out five to win his third straight start. The right-hander also hit two batters with pitches. Taylor Rodgers picked up his major-league-leading 21st save with two strikeouts in a perfect ninth.

The Padres spotted the Diamondbacks a 1-0 lead in the first inning, then made the most of their four hits off Arizona starter Zach Davies without their offensive leader.

Arizona's run came after a game-opening single by Daulton Varsho, who moved to second on a walk and came around on two long flyouts, the second by Christian Walker. The Diamondbacks had the bases loaded when Buddy Kennedy struck out to end the inning on Darvish's 33rd pitch.

Cronenworth quickly got the Padres even with his seventh homer of the with two outs in the first. He is hitting .531 (17-for-32) in his past eight games.

The Padres took the lead with two runs in the second. Nomar Mazara doubled with one out. After Austin Nola drew a walk, both runners advanced on C.J. Abrams' soft roller to Davies. Kim followed with a two-out, two-run single to center.

Grisham made it 4-1 with his sixth homer, leading off the fifth.