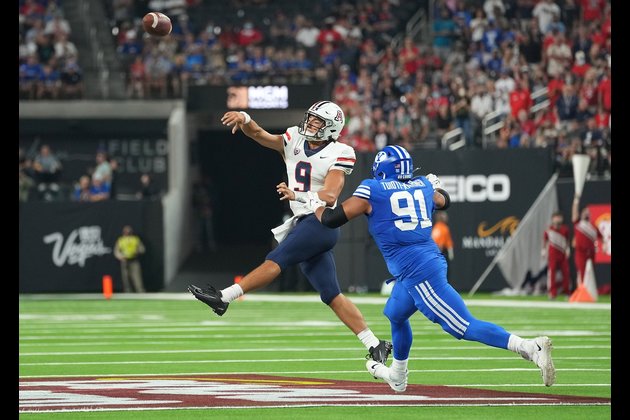 Arizona will try to end the nation's longest losing streak with its backup quarterback when the Wildcats play at Colorado on Saturday in Boulder, Colo.

Jordan McCloud, who showed promise in starting the past two games, suffered a season-ending leg injury in the fourth quarter of a 34-16 loss to UCLA on Saturday night. First-year coach Jedd Fisch will go back to Gunner Cruz, who started the first two games before losing his job.

Cruz passed for 336 yards in the opener against BYU but struggled against San Diego State in the next game.

"I believe in Gunner," Fisch said of the Washington State transfer.

"Gunner won the job in training camp because of the way he was able to throw the football. We have to go back to that week of BYU preparation and remind him why he won the job and show him some of the good things he did against BYU."

The Buffaloes (1-4, 0-2) are coming off a bye week as they enter this basement battle in the Pac-12 South. They are on a four-game skid -- although a 10-7 home loss to Texas AM on Sept. 11 looks more impressive in hindsight.

Colorado, too, is facing quarterback questions. Freshman Brendon Lewis has completed 48 of 90 passes for 475 yards, with 2 touchdowns and 2 interceptions.

"Hopefully, the changes we've made are going to help us play more efficient and effective football," Dorrell said of off-week tweaks. "We addressed a lot of things. Coaches' roles, in terms of what the expectations are, the expectations we set for our players ... they've owned up that we can be better."

Colorado will try to unleash Jarek Broussard, the 2020 Pac-12 Offensive Player of the Year. He has been held in check this season, rushing for 256 yards on 60 carries in five games.

Arizona gave up 329 rushing yards last week to the Bruins and allow 219.4 per game, ranking 122nd in the nation.

Each offense has suffered from a lack of explosive plays. Colorado hasn't scored more than 14 points in a game during its four-game slide. Arizona hasn't reached 20 points in eight consecutive games, which includes a home loss to FCS Northern Arizona last month.