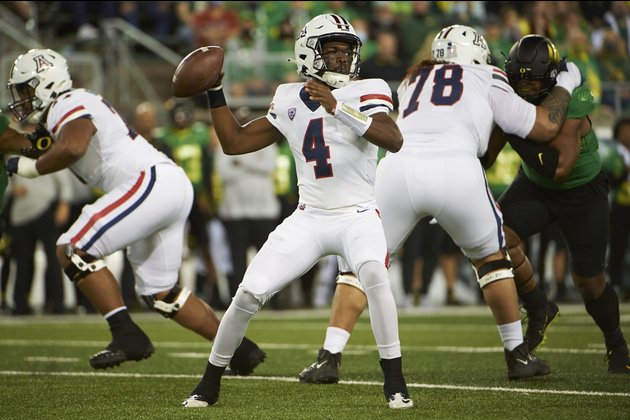 Starting quarterback Jordan McCloud will be out the rest of the season, according to Arizona head coach Jedd Fisch, who announced the news Monday.

"This is not a nine-month or 12-month injury by any means," Fisch said. "This is more of just unfortunately where we are in the season."

Multiple reports Sunday said McCloud would be out for the season following the sophomore's right leg injury against UCLA.

During the game Saturday, McCloud had his right leg bent at an odd angle as he was sacked early in the fourth quarter of a game the Wildcats lost 34-16.

McCloud, a transfer from South Florida, played in three games for Arizona (0-5, 0-2 Pac-12), starting the last two. Overall, he completed 66.7 percent of his passes for 481 yards with 2 touchdowns and 5 interceptions.

"He transferred here to play. He came here to really help us, and I believe as he was learning the system more and more, we were going to be able to reap some of those benefits," Fisch said.

Previous starter Gunner Cruz is expected to start for the Wildcats Saturday against Colorado.