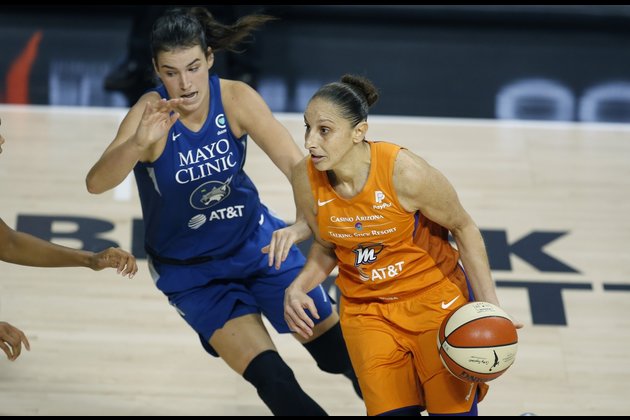 Phoenix Mercury guard Diana Taurasi has been selected by fans as the WNBA's greatest player of all time.

The league conducted the "Vote for the GOAT" balloting as part of its 25th anniversary celebration. Sue Bird, Maya Moore, Candace Parker and Cynthia Cooper rounded out the top five in voting.

"Congratulations to Diana Taurasi on being voted as the greatest WNBA player of all time by the fans who have followed her illustrious career and saw her rise above the rest," WNBA commissioner Cathy Engelbert said in a news release. "This well-deserved recognition reflects her sustained excellence on the court and her leading role in advancing the WNBA and women's basketball and being a role model for young athletes everywhere. The opportunity to honor Dee is yet another special moment in celebration of our historic 25th season."

The award is part of a big weekend for Taurasi, 39.

On Friday night, the Mercury defeated the Las Vegas Aces in the semifinal round to win a spot in the WNBA Finals, which begin Sunday night in Phoenix against the Chicago Sky. On Saturday morning, she arrived back in Arizona in time to be there when wife Penny Taylor gave birth to their second child, a girl.

After leading UConn to three straight national championships, Taurasi was the No. 1 overall pick by Phoenix in the 2004 WNBA Draft. She is the league's all-time leader in points, field goals made and 3-point field goals made in both the regular season and the playoffs. She has been named to All-WNBA teams 14 times -- the most in league history.

She has won three WNBA championships and two WNBA Finals Most Valuable Player awards. She also earned the regular-season WNBA MVP award in 2009.

Taurasi has career averages of 19.4 points, 4.3 assists and 4.0 rebounds in 472 games. She has led the WNBA in scoring five times and in assists once.